Higher resolution, larger screens and image-enhancing software are improving the precision and safety of abdominal surgery. 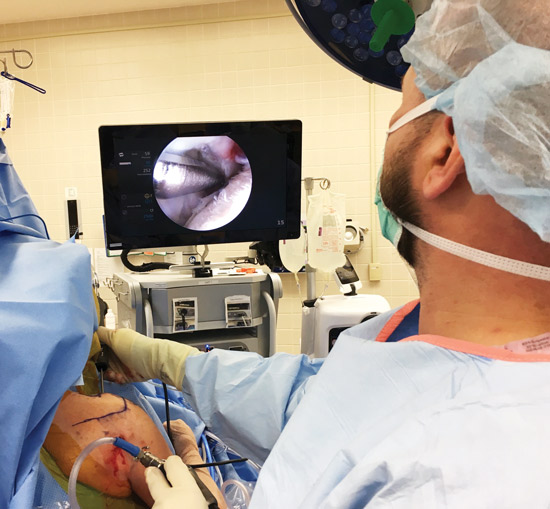 POINT OF VIEW Surgeons who operate in ultra-high-def are able to notice subtle differences in tissue and better identify critical anatomy.

The better surgeons can see anatomy during minimally invasive abdominal procedures, the more precise their work will be. Ultra-high-def camera systems, image-enhancement software, fluorescent dyes and oversized monitors all provide increased clarity and brilliance that lets surgeons confirm the results of their cuts in real time, letting them produce results that cause less trauma to the body and less post-op pain — and shorter recovery times.

Facilities that still have standard high-definition video systems are searching for ways to add the advanced imaging clarity of 4K ulta-high-def, says Suraj S. Soudagar, MS, MBA, LEED AP, principal and project executive with IMEG Corp., a healthcare engineering firm in Naperville, Ill. A 4K system with one laparoscopic camera — the most expensive component in the imaging chain — runs approximately $100,000, and the price goes up as you add additional scopes.

“Cost is the only reason we’ve not seen a more rapid transition from high-def to 4K,” says Mr. Soudagar. “As the cost goes down, the adoption rate will increase exponentially.”

Abdominal surgeons are wowed by the clear views and vibrant colors of 4K imaging and appreciate operating with the 3D views robotic platforms provide. Now 4K/3D imaging systems marry the two technologies. “The brilliance of the images produced by these new scopes and cameras are quite spectacular,” says Helmuth Billy, MD, a bariatric surgeon in Ventura, Calif.
Mr. Soudagar says 4K/3D systems minimize what amounts to guesswork with the naked, albeit trained, eyes of surgeons. The new systems allow them to better see tissue and anatomical details that might have otherwise gone undetected. “Even with 4K, surgeons feel like they’re operating down a dark tunnel,” says Mr. Soudagar. “The addition of 3D imaging essentially provides them with a surgical version of a GPS system.”

Facilities that can’t afford a 4K system can invest in image-enhancement technology that digitally processes and enhances video images, making them clearer and brighter than how they’d appear in standard high-def.

Combining three-chip laparoscope camera heads with image-enhancing algorithms that automatically locate, identify and brighten dark areas of an image in real time assists surgeons because they don’t have to manually increase brightness levels on the scope or move the camera closer to dark spots in order to improve their views of the areas. The technology also differentiates tissue structures by enhancing color contrasts, so surgeons can make instant distinctions between blood vessels and other parts of the anatomy.

“Facilities with a limited budget can buy an image-enhancement system for about $25,000 and get a 4K-like image,” says Mr. Soudagar. “It’s not true 4K, but it gets the job done.”
The smallest 4K monitors are 32 inches, which is a good entry-level size for most ASCs. However, larger screens are becoming more common in today’s ORs — and have the pixel size and pixel-and-color density to maximize the visual benefits of 4K imaging.

Monitors up to 32 inches in size can be hung on a standard ceiling-mounted boom, while larger screens require sturdier arms. In addition to the two to three screens positioned in the immediate surgical field, many ORs feature large monitors hung on walls, where members of the surgical team who are performing support functions for the procedure from outside the sterile field can follow the action and prepare for the next step in the case.

“We have an integrated operating room that houses one huge screen, about 60 inches, on the wall for anesthesia and the circulators and two smaller ones, about 24 inches, for the surgeon and the assistant to use,” says Dr. Billy. The larger, wall-mounted monitor is particularly important during robotic procedures because the rest of the OR team can’t see what the surgeon is viewing through his console, says Dr. Billy.

Mr. Soudagar suggests buying video monitors from the same company that makes your imaging system because they’re designed to work optimally together — and not work as well with systems from other manufacturers.

“You can still mix and match brands and make it work,” says Mr. Soudagar. “But I agree with the trained eyes of surgeons who insist it’s beneficial to use monitors that come from the same company that makes the rest of the imaging chain.” 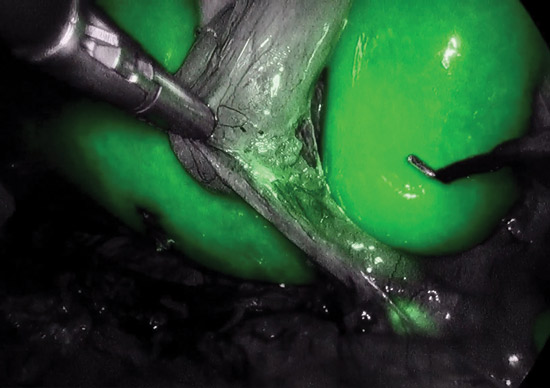 SHARPER CONTRAST Fluorescence imaging allows surgeons to distinguish one tissue structure from another by showing them in different colors.

Fluorescence-augmented surgery consists of injections of inert molecules, most commonly indocyanine green (ICG), that light up body structures to make them more visible to surgeons. When surgeons constantly toggle back and forth between the fluorescent imaging with the contrasting agent and normal white lighting, they’re able to perform procedures that are more accurate and safer for patients.

“In addition to helping with decision-making, it assists with the identification of structures that you want to keep safe and not injure during a case,” says Daniel Shouhed, MD, director of the robotics simulation program at Cedars-Sinai Medical Center in Los Angeles.

For example, ICG can identify biliary structures such as the common bile duct during gallbladder surgery and highlight the ureter during colon procedures. It also helps distinguish between malignant and benign tissue because ICG fluoresces differently in each. “By lighting up structures you wouldn’t be able to see without it, fluorescent imaging allows you to check the viability of two segments of tissue before connecting them, such as during a bowl resection,” says Dr. Shouhed. “It’s a very effective roadmap that creates more precision and safety.”

These new systems are far superior in brilliance than anything we’ve ever seen.
— Helmuth Billy, MD

At less than $200 per case, the use of ICG or another contrasting agent called methylene blue is an affordable image-enhancing option. Mr. Soudagar says the use of fluorescent imaging is on the rise and major imaging manufacturers are offering it as part of their systems. He suggests that facilities that adopt the technology considering getting green lights installed in OR ceilings.
“A lot of data supports the use of green lighting in the OR during endoscopy procedures because your eyes are better able to adjust to the green you’ll be seeing on the screens,” says Mr. Soudagar.