The preferred approach has sparked plenty of debate among orthopedic surgeons. 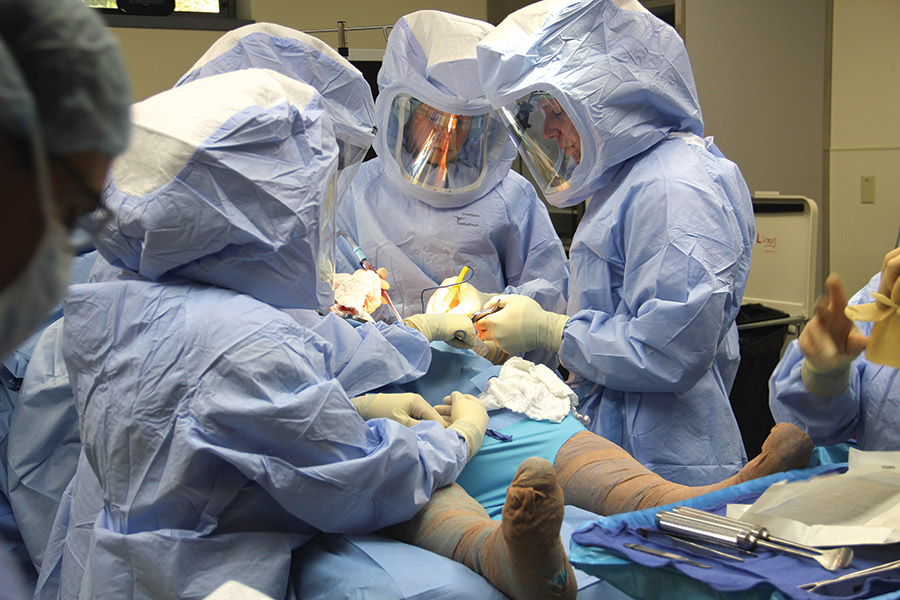 TALENT SHOW The surgical approach isn’t as important as the surgeon performing the procedure, according to Dr. Daniel Pincus.  |  Patrick Toy

Ask a dozen orthopedic surgeons if they prefer to enter the hip from the front or back during joint replacement procedures and you might get a dozen different answers. The posterior and direct anterior approaches have been researched, rehashed and reexamined by docs who view the issue (and joint) from opposite sides. It shouldn't be surprising that they have trouble reaching a consensus when both techniques have inherent advantages and disadvantages.

• Posterior approach. The incision is made on the side of the hip, above the greater trochanter of the femur, and the dissection goes behind the abductor muscles. "As a result, patients usually recover with no risk for long-term abductor dysfunction or chronic limping," says Daniel Pincus, BA&Sc, MD, PhD, FRCSC, a joint replacement specialist and an assistant professor at the University of Toronto Sunnybrook Holland Orthopaedic Centre. "The posterior approach is also the most extensile, making it the primary option for revision surgery."

Joshua C. Rozell, MD, a hip and knee reconstruction specialist at NYU Langone Orthopedic Center in New York City and NYU Langone Ambulatory Care Bay Ridge in Queens, notes dissection achieved through the posterior approach is generally easier to perform because the hip is more accessible from the back than it is from the front. "Surgeons achieve easy extensibility of the incision and greater exposure for better access to the implant's femoral stems," he explains.

Disadvantages of the posterior approach include higher rates of post-op joint instability and slower recoveries than the anterior approach. Intra-

operative dislocations used to be fairly common during posterior hip replacements, according to Dr. Pincus, but he says improved surgical technique (repair of the posterior capsule) and technology (implants with large diameter bearing surfaces) have lowered rates to levels on par with the anterior approach.

Advantages of the posterior approach include less blood loss, faster surgical times and less anesthesia prep time. Additionally, the technique does not require fluoroscopy or a specialized hip table, points out R. Michael Meneghini, MD, director of the Indiana University Health Hip and Knee Center and professor of clinical orthopedic surgery at Indiana University School of Medicine in Indianapolis. "I believe that's why we might see a resurgence in its use, especially in the surgery center setting," says Dr. Meneghini. 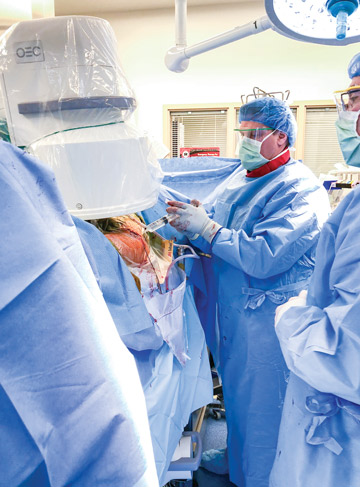 IMAGE EXPOSURE The direct anterior approach is more conducive to the use of intraoperative fluoroscopy.

• Direct anterior approach. Surgeons enter the joint through the internervous plane and between the abductor muscles, leaving external rotators and tendons intact. "In theory, it's a muscle-sparing approach that facilitates faster early recovery," says Dr. Pincus. "Whether it achieves this goal after the retractions and releases performed during surgery is controversial."
The approach allows surgeons to better measure leg length, according to Dr. Rozell. "That can also be done with the posterior approach, but it's more difficult to do and might not be as reproducible," he says.

Dr. Rozell believes the anterior approach is cleaner and the soft tissue preservation makes it more conducive to outpatient procedures. "Anecdotally," he adds, "I've found joint stability is typically better than with the posterior approach."

Another potential disadvantage involves the location of the incision. "It's near the groin where the skin and underlying tissue and fascia are less robust for closure compared with the side of the hip where the posterior approach is performed," explains Dr. Meneghini. "This has led to an increased risk of wound breakdown and prosthetic joint infection."

Dr. Pincus says the direct anterior approach limits the femoral access needed for inserting the implant's stem. However, he also points out surgical techniques (releases of capsule and tendon from the femur) and technology (specialized tables, offset equipment and shorter/curved stems) have been devised to address this limitation.

The direct anterior approach has long been considered the more technically difficult to perform in terms of how easily the implant's femoral stem can be inserted, says Dr. Rozell. However, he notes the procedure is now commonly performed and younger surgeons have extensive experience with it, meaning the learning curve is less of an issue.

Patients are supine during the anterior approach, making it more conducive to the use of fluoroscopy, which lets surgeons confirm that the implant's components are well-positioned. Dr. Rozell says the use of a specialty table provides better control of the leg on the operative side and allows him to set external rotation, extension and traction, a benefit that frees surgical assistants from supporting the leg throughout the procedure.

Dr. Rozell performs many of his hip replacements at a large academic medical center that invested in specialty tables and computer navigation software, a combination that helps him determine the optimal implant position and leg length for the patient.

"The table also makes it easier to keep the leg in one position for the femoral preparation part of the case," he says. "I'm able to focus more on the procedural steps instead of worrying about keeping the leg stable."

Approaches to the hip are typically based on the preferences of surgeons, who often use the one they're most comfortable performing or the one they were taught during residency. "The way surgeons are trained plays a big role in the approach they choose," says Dr. Rozell.

That's not necessarily best practice. "In theory, the approach should be tailored to the patient," says Dr. Pincus. For example, he notes the direct anterior approach should likely be avoided in obese patients with pannus overlying the incision location, a factor that can lead to wound healing difficulty and infection. However, he points out these risks can be mitigated with proper wound management protocols.

Femoral preparation in large, muscular patients is generally easier and less traumatic through a posterior approach, according to Dr. Pincus. In contrast, he says, some patients who've undergone spine fusion surgery might be at lower risk of complications with the anterior approach.

"Rather than switching between approaches depending on what would be best for the patient, most surgeons have a preferred way to perform hip replacements and stick to it," says Dr. Pincus. "We're fortunate to have techniques and technologies that facilitate the use of each approach and mitigate the risks inherent to each."

Dr. Rozell trained without the use of a specialty table and also operates at another facility that doesn't have a specialized surface, so he's comfortable executing the posterior approach. He believes surgeons should ultimately be experts in both techniques because they might have to switch from one to the other mid-procedure if they encounter difficult anatomy or run into issues while attempting their preferred method. Besides, he says, "any surgical approach done well can have good results." 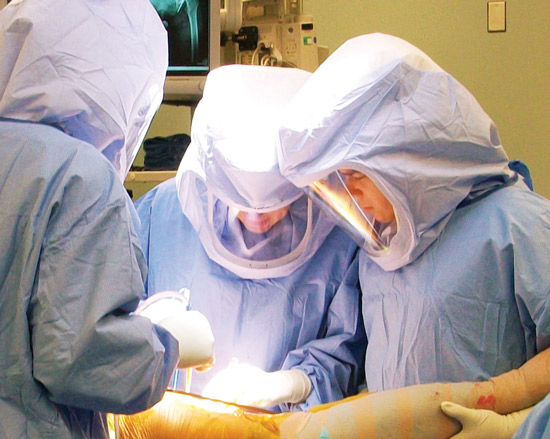 Dr. Pincus emphasizes that minimally invasive surgery is not defined by the location and length of the incision. "The pandemic has been a natural experiment of this notion with hospitals having fewer inpatient beds for hip arthroplasty patients," he says. "As a result, we're now seeing patients go home the day of surgery, irrespective of the approach performed."

Being able to prepare patients for same-day discharge after hip replacement depends on three important factors, according to Dr. Pincus: patient selection and expectations; anesthesia and pain control methods; and the skill of the patient care team. He believes the technique that's used doesn't impact how quickly patients recover as much as some surgeons and health systems claim.

Dr. Meneghini agrees. "Recovery from hip replacements is dictated more by post-op physical therapy and effective post-op pain management that allows for early ambulation," he says. "It has little to do with surgical approach. We sit around arguing about which approach is best, but in the end it doesn't matter. They're just different."

At Dr. Pincus's hospital, surgeons perform the highest volume of hip replacements in Canada and utilize both approaches. More than 90% of the patients, including those who undergo complex cases, are discharged on post-op day one, regardless of the approach used.

"This doesn't mean patients won't recover faster and do more physically sooner and with less pain following the abductor-sparing direct anterior approach," says Dr. Pincus. "It simply means whether patients can be discharged early is not significantly related to the technique used during surgery.

"Despite all our work on this topic, I still believe the choice of surgeon is much more important than the choice of approach. However, other surgeons will have different ideas about which approach they think is best, and they'll also be right."