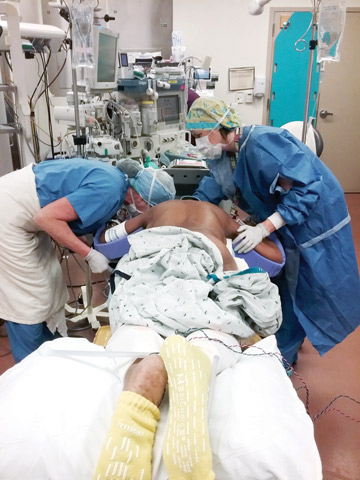 Members of the perioperative team at The Johns Hopkins Hospital in Baltimore work many challenging surgeries on very sick patients, yet can count the number of pressure injuries their patients have suffered on two hands. That’s no accident, as pressure injury prevention is a key initiative at the hospital.

About five years ago, a multidisciplinary team investigated how to better assess pressure injury risks and prevent injuries from occurring. They focused on cases involving the prone position such as craniotomies and particularly spine. “We were seeing redness when we turned the patient back to the supine position,” explains Kendra B.J. Myers, BSN, RN, CNOR, lead clinical nurse of neuro-surgery/ortho/spine/otology. In addition, the team noted a general increase in pressure injuries and skin integrity issues on the Hopkins Event Reporting Online (HERO) system, which logs safety concerns.
The team trained its spotlight on the quality of its skin assessments and intervention strategies throughout the perioperative episode, with the goal of creating a pressure injury prevention bundle for high-risk patients. Its key elements offer useful guidance on how to protect patients’ skin during the course of their care. 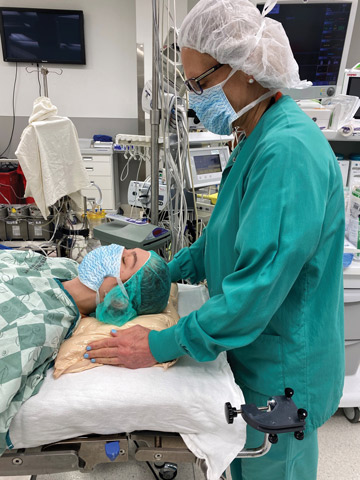 HEADS UP Pay close attention to the condition of patients’ skin at each stage of their care.
The first step is to select and implement a standardized way to determine pressure injury risks. Guidance from the Association of periOperative Registered Nurses (AORN) led the Hopkins team to the Scott Triggers Preoperative Risk Assessment Tool ( scotttriggers.com), which addresses the following risk factors
• Is the patient 62 years or older?
• Is the ASA score 3 or greater?
• Is the albumin level less than 3.5 g/L?
• Is the BMI less than 19 or greater than 40?
• Will the surgery last longer than three hours?
Two or more “yes” responses indicate the patient is at risk of suffering a pressure injury and preventative strategies should be implemented.
The Scott Triggers assessment was originally piloted as a paper-based form at Hopkins, but the perioperative team worked with the hospital’s IT department to digitally integrate the tool in its EMR, making it even more powerful.
Pre-op nurses complete the Scott Triggers assessment in pre-op and pass the information to members of the surgical team, who enter it into the EMR. If two or more criteria are outside the tool’s parameters, the EMR automatically alerts the team that the patient is high risk. “Based on the surgical position the surgeon posted in the EMR, a sidebar appears onscreen that shows the vulnerable anatomy and specific positioning aids we should use,” says Ms. Myers. “All the information is right there for easy access.”

After the patient is under anesthesia in the OR, nurses examine their skin and document any visible integrity concerns — a process the Hopkins team calls a “safe skin scan.” At the conclusion of surgery, the surgical team once again assesses the condition of the patient’s skin, documents the results and shares the info during verbal handoffs with recovery room nurses. 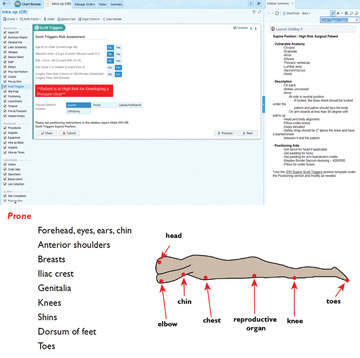 SKIN SCREEN When nurses perform skin assessments at The John Hopkins Hospital, the EMR automatically detects if a patient is high-risk for pressure injuries and provides detailed skin protection and positioning instructions.  |  The Johns Hopkins Hospital
Protecting patients from pressure injuries requires padding their bony prominences and vulnerable areas with effective positioning aids. The Hopkins team had used eggcrate and foam-type positioning aids before studying how to better prevent pressure injures, and now rely almost entirely on gel-based products to protect and pad patients’ skin. “The literature found foam positioning aids do not disperse pressure on bony prominences,” says Ms. Myers. “Gel positioning aids have a better ability to disperse pressure as the patient is on the table.”
To trial various gel products from numerous vendors, the team set up a “gel fair” and invited its surgeons, anesthesia providers and nurses to evaluate the many offerings. “We looked at what the vendors had available, the types and shapes, and what would meet our needs for prone, supine and lateral positioning,” says Ms. Myers. “Thankfully, there was consensus behind a single vendor.”
The team then assembled an inventory of positioners, engaged surgeons on the new patient positioning protocols, and educated staff on the basis for skin integrity assessments as well as how to use the positioning aids and Scott Triggers tool.
After gel positioners are used on a patient, staff drop them off in a “dirty” utility room, where they’re cleaned with a disinfecting solution and then wiped down with water to remove any residue.

“It’s an easy process, and we can turn them around quickly,” says Ms. Myers. “The biggest challenge is that some of the smaller products get thrown away. We constantly remind our team members to make sure heel pads and armboard pads don’t get tossed in the trash.” Gel positioners that are torn from usage are discarded and reordered as part of a monthly inventory check.

Skin in the game

Hopkins had a very good record with pressure injury prevention before reassessing and revamping its practices, but the new positioning protocols the team implemented has taken its efforts to new heights. Before the project, eight pressure injuries occurred in approximately 4,600 surgeries. After implementation of the prevention bundle, two pressure injuries occurred in about 5,500 cases. The hospital’s new protocols reduced the injury rate from 0.17% to 0.03%. “I don’t think it’s realistic to get to zero, especially because we do cases involving patients in the prone position that can last 10 to 12 hours,” says Ms. Myers. “We get the sickest of the sick here.”
That’s not to say the Hopkins team ignores pressure injury risks in the ambulatory setting. The Scott Triggers assessment and prevention bundle are also implemented at the health system’s ASC, where some patients are classified as ASA 3 and some cases last longer than three hours. “That’s two criteria met for high risk of pressure injury,” points out Ms. Myers.
It’s evident pressure injuries are no longer predominantly an inpatient issue, especially now that more complex and lengthier surgeries are steadily migrating to outpatient ORs. When Outpatient Surgery surveyed surgical administrators on their facilities’ patient safety protocols just before the pandemic, 90% of respondents said they used positioning devices or aids to limit pressure injury risks. That’s encouraging — and necessary.
“Risk stratification and pressure injury prevention protocols should be exactly the same in hospitals and ASCs,” says Lee Ruotsi, MD, ABWMS, CWS-P, UHM, medical director of the wound healing program at Saratoga Hospital in Saratoga Springs, N.Y. “Our system’s director of surgical services and ASC director agree on this.”
The two directors say the length of time patients spend on the OR table is a critical factor in the development of pressure injuries, according to Dr. Ruotsi. “They use two hours as a point at which they feel the risk increases substantially,” he explains. “That’s a bit more aggressive — or more careful — than most sources I’m familiar with.”
Pay particular attention to patients who are prone on the surgical table for extended lengths of time, advises Joyce M. Black, PhD, RN, FAAN, a professor at the College of Nursing at the University of Nebraska Medical Center in Omaha. “The operation might not take long,” she says, “but the front of the body, especially the face, does not have natural padding.”
Dr. Black says pressure injuries can cause damage well below the skin’s surface, pointing to instances of infected injuries on joint replacement patients resulting in implants having to be removed.

“Pressure injuries do occur during outpatient surgeries,” says Janet Cuddigan, PhD, RN, CWCN, FAAN, a professor at the College of Nursing at the University of Nebraska Medical Center in Omaha. “The problem is there’s no mechanism for accurate reporting, so no one really knows the extent.”
That’s partly because pressure injuries don’t become apparent until up to 72 hours post-op, says Dr. Cuddigan. “By that time, the patient has long since left outpatient facilities and probably won’t call back to report relatively minor Stage 1 or Stage 2 skin injures,” she adds. “I suffered a Stage 2 injury after an outpatient procedure, but didn’t let my providers know because I was much more concerned about caring for my incision.”
Dr. Cuddigan says the National Database of Nursing Quality Indicators (NDNQI) is exploring the possibility of extending its reporting mechanisms into outpatient units. Additionally, she says, the National Pressure Injury Advisory Panel (NPIAP) recently voted on adding criteria for OR-acquired pressure injuries to its Root Cause Analysis (RCA) tool.
These are promising developments. Increasing awareness of pressure injury risks and developing tools to find out why they occur will lead to safer patient care. OSM