Reinforcing a culture of safety will ensure surgeries are performed as planned.

Adverse events involving wrong-site, wrong-side and wrong-patient errors are devastating outcomes for surgeons who must live with the mistakes and patients who suffer unnecessary physical scars. These never events persist because of inconsistencies in implementing proven steps to prevent them. Ensuring surgeons perform the correct procedure on the right patient at the intended site requires a multidisciplinary effort and refocusing on the importance of building a culture of safety.

University of Pittsburgh Medical Center (UPMC) facilities are known for adherence to strict patient safety measures, including a series of steps designed to prevent wrong-site surgery. The effort begins long before patients are wheeled into the OR.

During daily morning huddles, the surgical team mentions if patients with the same or similar last names will be undergoing surgery that day so they're more focused than usual in ensuring the correct procedure is performed on the intended patient.

"We warn patients that they'll be asked to repeat their names and confirm their surgical sites multiple times before surgery, and tell them it's done for their safety," says Rhonda Sebastian, MSN, RN, CNOR, clinical director of surgical services at UPMC Horizon and Jameson. "We also never deviate from the process, regardless of the procedures patients are about to have done. Mistakes can happen when the process breaks down."

Excellent communication skills and teamwork play a big part in preventing wrong-site surgeries, says Robert Yonash, RN, CPPS, senior patient safety liaison at the Pennsylvania Patient Safety Authority (PSA). "We urge staff to work as a team and include the patient," he explains. "Though repeatedly asking patients the same questions can irritate them, the constant checks are necessary for error prevention. We need to include their understanding of the procedure being performed." 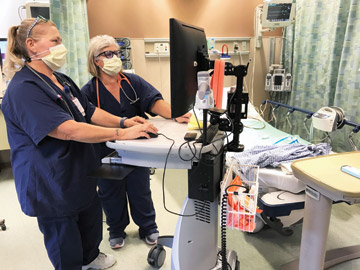 CLICK TO CONFIRM Patient information and procedure details are entered into UPMC's electronic medical record for staff to reference at each step of the pre-op process.   |  UPMC Jameson

The legislature authorized the creation of the PSA, which is charged with receiving mandated error reports from facilities, analyzing the data and disseminating the information to help prevent future occurrences. "Pennsylvania was the first state to require the reporting of incidents that have the potential for patient harm, in addition to serious events," says Mr. Yonash.

The objective of reporting involves documenting and acknowledging what led to these incidents as well as providing case studies to other centers on how to prevent never events. It's promising that the rate of national self-reporting has increased in recent years. The Joint Commission says the percentage of self-reported sentinel events rose to 87% in 2017, compared with 62% in 2005, with 95 wrong-patient/site/procedure cases submitted. The Joint Commission estimates that only 2% of all sentinel events are reported nationally.

"If staff feel something isn't right or set up correctly, they can call a condition stop and the surgery will not proceed until we resolve the issue," says Ms. Sebastian.

Developing and maintaining a culture of safety was initially a challenge for UPMC Horizon, which acquired UPMC Jameson four years ago. Ms. Sebastian and her staff had to work to unite the two facilities.

Standardization of wrong-site surgery prevention protocols helped create a solid foundation for the union of the two facilities. "Safety is our number one priority for any patient that comes through here for surgery," she says. Her staff are trained to advocate for patients during surgery who are incapable of advocating for themselves.

Near-misses, which happen rarely, show UPMC's safety initiatives have worked correctly. Nurses don't hesitate to speak up if something is wrong. "There is a lot of staff involvement," says Ms. Sebastian. "Empower your staff to speak up and always stand behind them. Let them know that if they stop the line, they won't be punished. They need to know you're going to have their back." 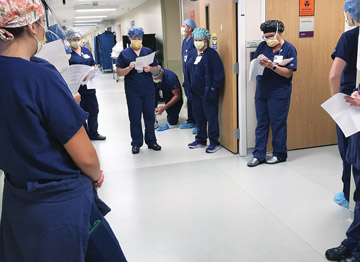 UPMC uses a combination of the policies and procedures created by recommending bodies such as the PSA, the World Health Organization and The Joint Commission. On top of staying up to date on the newest safety recommendations, Ms. Sebastian's facilities implement their own safety measures, such as the condition stop, which is practiced throughout the entire UPMC network.

Staff engagement extends beyond clinical members to involve the risk management and legal departments at UPMC. The risk management staff stays in close contact with PSA. Safety liaisons have held in-services, which are mandatory for operating room staff. Officials from the legal department also periodically in-service staff on consents and Ms. Sebastian's team interacts frequently with the PSA.

The PSA's structure as a non-regulatory body, detached from the state department of health, allows it to work with facilities on constructive solutions to safety-related issues without the underlying threat of citation. This arrangement lets PSA maintain confidentiality and work directly with facilities to improve patient care. Ms. Sebastian believes the mandatory reporting of safety incidents in Pennsylvania opens up the lines of communication among facilities, and eliminates the danger of maintaining a sense of secrecy about what happens in the OR.

"Surgical professionals want to do the right thing," says Mr. Yonash. "We want to keep patients safe. Honest communication plays a big part in this. We want everyone to work together and to speak up if something doesn't look right."

Teamwork, transparency, continued education and staff support have created an excellent environment of safety at UPMC Horizon and Jameson, one to be modeled by other facilities looking to improve practices that prevent wrong-site surgery. "Provide a lot of support and education for your staff," says Ms. Sebastian. "It takes time to make change happen. Stay the course — it won't happen overnight." OSM