Cost savings is only one of the benefits realized by limiting the number of vendors who vie for your facility's business.

Total joints are a hot specialty and orthopedic vendors want a piece of the action. Leveraging your facility’s current case volumes and the expected explosive growth of future demand to deal exclusively with a select few companies is a smart business strategy.

Look no further than Twin Cities Orthopedics (TCO), an independent practice with multiple locations throughout Minnesota and western Wisconsin. In 2012, leaders of the group’s fledgling total joints program made the game-changing decision to limit its implant and instrument purchasing to just two vendors. The arrangement, known as a dual-source agreement, paid off in a big way. “At that time, the move yielded us a pricing improvement of about 20 to 30 percent,” says Aaron Johnson, chief executive officer at TCO.

The group consolidated vendors to help grow its business, and last year did nearly 2,000 total joint procedures in its EXCEL program. At that volume, an all-play model yielded even better pricing than the dual-source agreement, which is why TCO returned to a traditional bidding model.

Granted, many outpatient total joints programs don’t have that type of volume. “From a cost and reimbursement standpoint, facilities that perform 200 to 300 cases a year benefit significantly from a consolidated vendor model,” says Mr. Johnson. “The move puts them in a position to make their program more successful.”

Pricing discounts are a primary motivator for consolidating suppliers, but there are plenty of benefits you can’t quantify. For instance, says Mr. Johnson, working with only four or five vendors — as opposed to a half dozen or more — significantly reduces the number of instrument trays at your facility, which in turn streamlines the operations of your sterile processing department and saves your facility precious storage space.

If you’re considering consolidating total joints suppliers, it helps to look beyond the traditional transactional relationship where both parties are focused solely on negotiating costs. “Consolidation establishes a true partnership between you and your vendor,” says David Uba, MBA, the CEO of Buffalo Surgery Center in Amherst, N.Y. “As the relationship grows, you’re discussing the many value-added services they offer.”

When you partner with a preferred vendor, says Mr. Uba, you’re also getting access to educational content, rebate programs and even opportunities to purchase capital equipment through various vendor-run programs. Thanks to a single-source vendor arrangement, Mr. Uba was able to procure a navigation system his total joint surgeons requested. “He used the system at a local hospital, and wanted our center to add it, which would help convince him to bring in cases on a consistent basis,” says Mr. Uba. “The vendor we worked with exclusively got creative and found a way to help us add the platform.” 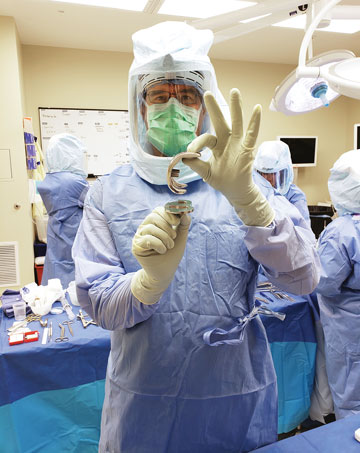 INVALUABLE INSIGHTS Surgeons have firsthand knowledge about the cost-effectiveness of implants and supplies.

If you're planning on consolidating your total joints suppliers, physician engagement is paramount. To that end, Aaron Johnson, the chief executive officer at Twin Cities Orthopedics (TCO), offers the following best practices: 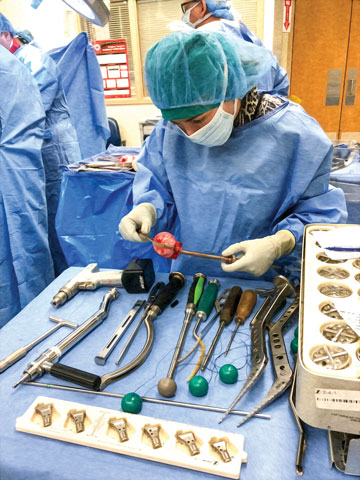 Consolidating your total joints suppliers is part science, part art. Before approaching vendors, pinpoint a price point or price range from which you aren’t willing to budge. A critical piece of advice when it comes to price negotiations with vendors: Don’t be bashful. “One thing I’ve learned with vendors is it never hurts to ask,” says Mr. Johnson. He points out the orthopedics market has changed significantly in recent years and a price that would’ve been completely off the table five years ago is now very much in play.

Spell out specific requests in RFPs. “We make it clear that we want all inventory consigned at our facilities, that we don’t want to own it,” says Mr. Johnson. “We also state that we expect our vendors to manage that inventory, that it’s not something any of our staff members will do.”

Rebates offer a safeguard against this, but they’re not for everybody. “Historically, we weren’t an organization that liked rebates,” says Mr. Johnson. “But we pivoted and accepted the fact that rebates were going to get us to the net price point we needed to be successful.”

Plus, depending on how they’re structured, rebates can garner your facility double savings — the initial savings of going with a single vendor and the added savings of a rebate program. “You might get a certain percentage of your spend back as a rebate based on incremental growth,” says Mr. Uba. “In that case, you’re not only getting a little bit lower unit cost for, say, an implant, you’re getting opportunities for a rebate on top of that.”

Although most vendors are sensitive to the regulatory environment, Mr. Uba cautions you ensure a vendor’s cost concessions meet current regulatory requirements.

Ideally, both you and your vendors should share the same objective. “Consolidation is ultimately about creating the greatest efficiency for the facility and surgeon, and the best outcome for the patient,” says Mr. Uba. OSM