Here’s how a leading cancer center rolled out its plan.

Up until a few years ago, Memorial Sloan Kettering Cancer Center didn’t have a standard surgical smoke evacuation program in place. While having such a program may seem like a no-brainer for one of the nation’s leading cancer centers, implementing a change of that magnitude is never a simple, linear process.

For leaders on the frontlines of the smoke-free OR cause, the question is obvious: Why don’t all healthcare facilities employ a surgical smoke evacuation system? For one, many providers aren’t even aware of the devastating effects surgical smoke can have on their bodies. According to the Occupational Health and Safety Administration (OSHA), an estimated 500,000 workers — including surgeons, nurses, anesthesiologists and surgical technologists — are exposed to laser or electrosurgical smoke each year. This smoke, also known as plume, includes carbon monoxide, polyaromatic hydrocarbons and a variety of trace toxic gases. Prolonged exposure has been shown to lead to serious respiratory diseases.

The exposure component is why, in 2019, a group of perioperative nurses at Sloan Kettering decided to tackle the issue by conducting a systematic review of available evidence on the effects of surgical smoke. They reviewed 151 articles from The American Association of Nurse Anesthesiology (AANA), AORN, the CDC and The National Institute for Occupational Safety and Health (NIOSH) to get the ball rolling. Here is how this leading cancer center prepared, planned and implemented its surgical smoke evacuation program.

To get the necessary engagement and buy-in from the surgical leadership, the group of nurses looked at the strong supporting evidence for using smoke devices. “Our physicians and colleagues are very much into making decisions based on evidence,” says Yessenia V. Salgado, DNP, RN, NE-BC, CNOR, director of nursing for perioperative services at the facility. The evidence-based recommendations all pointed to a significant area of concern: The lack of smoke evacuation in the OR leads to decreased staff health and air quality. On the hand, evacuation systems can reduce surgery time, improve patient outcomes and decrease the risk of SSIs. “When a filter is used during surgery, less smoke is inhaled by the OR team because there are fewer smoke particles in the air,” notes Dr. Salgado.

We’ve learned over the years that no matter what you’re doing, it cannot just be the initiative of one discipline. It must be a team effort.
Marcia Levine, MSN, RN, NE-BC

Despite the resounding evidence, the team made sure not to rush implementation to avoid the perception among staff of feeling forced to use a new device by the surgical team. Instead, with the support of the OR Executive Committee, they set a goal to implement a phased roll-out to new surgical specialties each month and transition away from the standard ESU pencil for all appropriate surgical procedures within six months to the smoke-free ESU pencil. The team encouraged and conducted small group discussions for personnel or service specialties still uncertain about implementing the smoke-free devices. “The devices have a different feel in a surgeon’s hand, and the team of nurses wanted to be mindful of ensuring the engagement of the surgeons,” says Marcia Levine, MSN, RN, NE-BC, vice president of nursing for inpatient and perioperative services at the hospital. Ms. Levine says the team worked with its medical physicists and enlisted a surgeon champion to have his cases monitored. Together, they compared the use of a regular ESU pencil versus a smoke-free ESU pencil. “We’ve learned over the years that no matter what you’re doing, it cannot just be the initiative of one discipline. It must be a team effort,” she says.

Dr. Salgado agrees with this advice and adds that new initiatives require listening to concerns if a team member is still apprehensive about the change. “Some of our surgeons had legitimate concerns,” she says. “For instance, we have a large sarcoma specialty service, and a couple of our surgeons shared that when operating deep in the pelvis, the size of the smoke-free ESU pencil limits the precision needed when resecting in such deep and small cavities.” The team learned this was due to the design of the smoke-free ESU pencil, which can be a bit obstructive with the smoke evacuation tube harnessed around the tip of the pencil. “We then worked together and found a compromise that included the use of the smoke-free ESU pencil for the majority of the cases with the removal of the tubing when working deep in the pelvis,” says Dr. Salgado. 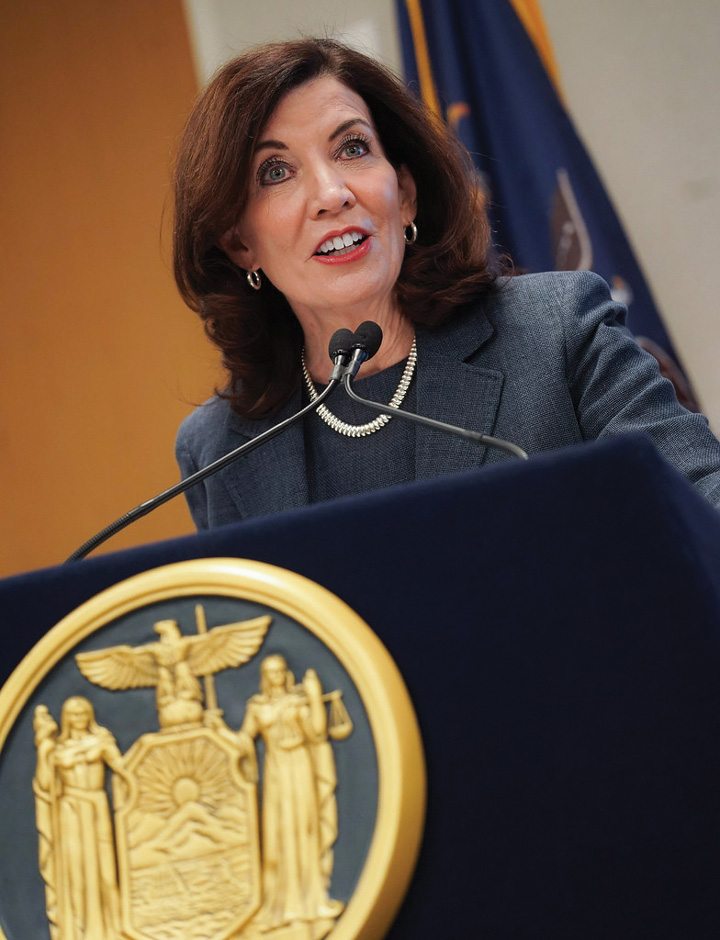 New York Governor Kathy Hochul signed legislation on December 16, 2022, as Chapter 701 of the Laws of 2022, advancing the Association of periOperative Registered Nurses’ (AORN) efforts to eliminate surgical smoke in the OR.

New York joins Rhode Island, Colorado, Kentucky, Oregon, Illinois, Arizona, Washington, Georgia and Connecticut as the 10th state in the United States to enact legislation that requires all licensed hospitals and freestanding ambulatory surgical facilities to adopt policies to use a smoke evacuation system for surgical procedures that generate surgical smoke. The law will take effect on June 14, 2023.

AORN, along with support from the New York Nursing Alliance and the American Nurses Association of New York, spearheaded the law’s passage to protect operating room staff and patients from the dangers of surgical smoke, a byproduct of the use of energy-generating devices. “There are no specific standards for laser and electrosurgery plume hazards,” said Jennifer Pennock, associate director of AORN Government Affairs, in a press release. “Instead, the safety policies have been left to the facilities nationwide. Too few have taken action to protect their healthcare workers. We believe New York’s proactive legislation will lead other states to follow suit.”
— Danielle Bouchat-Friedman

Being mindful of the clinicians and their needs can increase engagement and help your facility roll out a successful surgical smoke evacuation program. While New York is now the 10th state in the U.S. to enact legislation that requires all licensed hospitals and freestanding ambulatory surgical facilities to adopt policies to use a smoke evacuation system for surgical procedures that generate surgical smoke (See AORN INITIATIVE on page 46), Ms. Levine believes that an act of legislation shouldn’t precede a facility’s efforts to reduce surgical smoke. “I am sure facilities around the country are having this conversation, wondering how even to operationalize something that was just passed into law. But the fact that we made the change from within not only boosted compliance, it was also the right thing to do,” she says. OSM